Skip to content
You are here
Home > Comics > A Brief Look Back At Avengers: Earth’s Mightiest Heroes 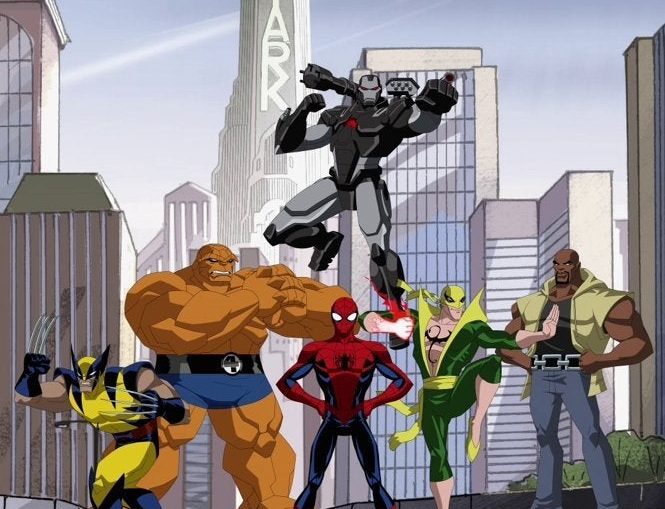 Happy Thanksgiving everyone! Not quite sure when, but in the near future I’m going to write about my favorite moments from my favorite comic for the past few years, the unbeatable Squirrel Girl (that sadly ended it’s run with this month’s issue 50), but I’ve been a bit busy covering wrestling and haven’t had a chance to properly research it yet. So instead, I’m taking a short look back at one of the greatest overlooked cartoons of this decade, Avengers: Earth’s Mightiest Heroes.

Backstory – I did the free week trial of Disney+ so I could watch The Mandalorian for the podcast I co-host, The Episode One Podcast. I’m not going to get into too much detail on Mandalorian since I did a whole podcast on it (check it out here if you’d like, and if you like what your hear please subscribe rate and review us!), but suffice to say I liked the first episode and watched the three that were released during my trial. I plan on finishing it down the line too, but uncertain as to when. I can’t get into any specifics, but in the future I will definitely have more things to say about The Mandalorian as well – intrigue!

So I watched Mandalorian and realized I had Disney+ for a whole week! My immediate first stop was a cartoon I greatly miss to this day, Avengers: Earth’s Mightiest Heroes. It was such a great show! Kids could easily enjoy it, but honestly they made the show for true comic book lovers, as the show effortlessly weaved in so many great comic book storylines in a relatively small amount of time (the show only ran for two seasons). With more time I may have rewatched the whole series, but with the limited time I had I just watched a handful of episodes. The first episode I went straight for was season 2’s Along Came A Spider. (Spoiler alerts ahead).

Besides the great job the show did incorporating Marvel comic book history, it did an even more tremendous job with the characters. In this episode the public has turned against Captain America since he became the face of the Secret Invasion Skrull attack (the show did Secret Invasion way better than the comic did by the way). And thanks to The Daily Bugle, the public is always against The Amazing Spider-Man, so he knows a thing or two about being misunderstood. So Cap and Spidey end up having to save a small group of civilians trapped underground in a subway collapse that don’t like them one bit WHILE ALSO having to fight off The Serpent Society looking to free two of their own during a prison transport (that caused the subway collapse). If you’re a Cap or Spider-Man fan you owe it to yourself to check this episode out. Cap and Spidey have always had a fantastic dynamic together and this episode did a great job capturing that and did both of these characters incredibly proud.

The next episode I watched was New Avengers Protocol. The Avengers seemingly meet their end in a battle with Kang The Conqueror, so Iron Man’s New Avengers protocol goes into effect. Messages are sent to Spider-Man, Wolverine, War Machine, The Thing, and the “Heroes For Hire” versions of Power Man/Luke Cage and Iron Fist saying that The Avengers have fallen and they’re needed to take their place. The heroes struggle working together initially and nearly disband, but the wise beyond his years Spider-Man (he was still a teenager in this series) rallies everyone and they manage to bring back The Avengers, who Kang had displaced in time. It was so much fun seeing all these characters together! I love the Heroes For Hire Power Man and Iron Fist (at the end of the episode Spider-Man tells Iron Man that Luke Cage said he’s going to bill him), The Thing and Wolverine busted out a fastball special – I wish we had gotten to see more of this team together during the series.

The last episode I’ll touch on is The Private War of Doctor Doom. What’s not to love about this episode? It’s got Doctor Doom! A superhero poker game! The Thing and The Hulk fighting like pre-teen brothers! Sue Storm and The Wasp hanging out! Iron Man and Mr. Fantastic talking science! And did I mention Dr. Doom? Doom launches simultaneous attacks on Avengers Mansion and The Baxter Building, successfully completing his plan of kidnapping The Invisible Woman and The Wasp. The Avengers and The Fantastic Four go to rescue them. They struggle against Doom and his robot army until Dr. Doom simply lets Invisible Woman and Wasp go. The end of this episode is the kicker. This was the season 2 premiere and served as the set up for the Secret Invasion storyline (I can’t recall for sure, but I believe Cap was revealed to the audience to be a Skrull in the season 1 finale. He was definitely exhibiting Skrull like behavior this episode that none of the other heroes picked up on). Anyway, after the heroes have left, Dr. Doom is in his lab looking at the results of tests he performed on Wasp and Invisible Woman – where it’s revealed that Invisible Woman is a Skrull!

Did you watch Avengers: Earth’s Mightiest Heroes? If so let me know what you thought in the comments and I’ll catch you next time!