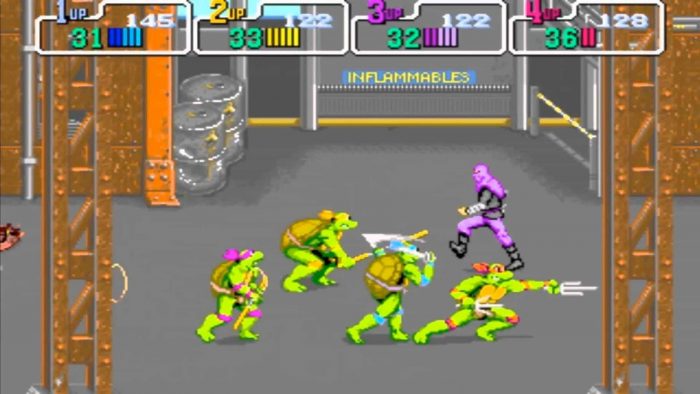 Happy Holidays everyone! I just got back from being home for the holidays, where I intended to watch Star Wars: The Rise of Skywalker with my mom and write up our thoughts on it, but we didn’t get to see it. Not because of five feet of snow this time, but because she wanted to re-watch The Last Jedi before seeing it. I did get her to watch The Mandalorian, which she liked. But while I was home, I did come across something that entertained me as a kid and was equally entertaining as an adult – the Teenage Mutant Ninja Turtles arcade game!

I’m very curious what the arcade gamer to current gamer ratio is. As I mentioned a time or two or three, I hardly play any video games these days. But back in the day I played all the time! I had a Sega Master System, then later a Genesis, then the original Playstation, and then the last system I owned was the Nintendo Game Cube. Besides those, I played tons of different systems at friends’ houses, and arcades were readily available (my mall had two ) so I played there constantly as well. The Turtles game was one of my favorite arcade games of all time, so when I saw a playable mini version of the game set up at Walmart I had to stop and play.

The game was already started with Leonardo selected. My favorite turtle is Raphael, but Leo’s cool and I remembered him being particularly effective in the game too. A simultaneous positive and negative of the game was that beating it was never in real jeopardy. I started with I think 100 lives, then continues were unlimited too. Up to four people can play at a time, but the game sends the same number of enemies at you (a lot!) whether you’re by yourself or all four players are playing. It was difficult early on because of the number of enemies I faced, but later a random shopper saw me playing and remembered the game. I said “feel free to jump in” and he did. He at first played as Donatello but the buttons weren’t working so he played the rest of the game as Raphael (we went through a brief period where he had to continue moving Donatello until he eventually died off – new players started with just three or five lives, but had unlimited continues). The game got exponentially easier with a second player and we took out Krang and Shredder(s) with relative ease.

A quick review of the console is it’s definitely fun! And if you played the game as a kid it’s got a great nostalgia factor too. The replay-ability factor is minimal though, it’s not particularly challenging to beat with no enhancements or power ups to be gained for a replay. Four kids shouldn’t have any problem fitting in front of the machine, but four adults may be crammed as the controls are kind of close together. It’s perfect if you’re setting up your own arcade but if you were to buy it solely for the game you should be able to track down a cheaper version of it somewhere else.