You are here
Home > Comics > What I didn’t like about Thor: Ragnarok

So I just got done listening to my partners in comics Nate and Mo talk about Thor: Ragnarok on the latest episode of the That’s Entertaining podcast and it was very entertaining, hence fulfilling the mission of the podcast.  If you haven’t already, give it a listen – you’re already on the page!  Just scroll down a hair and you’re there!  My overall opinion of the movie more or less coincides with how they felt about the movie.  I liked it, it was a very good change of pace for a Thor movie, and it was the comic book movie I feel the genre needed, a wall to wall action-comedy with an emphasis on the comedy.  Mo (a kind of big Hulk fan in case you didn’t know) wasn’t happy with the Hulk’s portrayal in the movie, and I side with him on this, but for different reasons.

I freely admit this could be my error, maybe I missed this in the movie, if I did someone let me know in the comments please or on Twitter or something.  This also could be something the movie meant to do but got lost in translation or dropped on the cutting room floor, in which case shame on you movie!  My problem with the Hulk, and much more specifically the movie, is this – when Thor gets captured by Valkyrie, she puts an obedience disk on him.  I’m not sure if it was ever called this in the movie, but it’s what she kept using to shock Thor and what was used to keep the other gladiators from rebelling and forcing them to fight and so forth.  I kept looking, but I never saw an obedience disk on Hulk.  Evidence to support that Hulk wasn’t wearing an obedience disk is when Thor gets his disk off and escapes with Hulk.  Thor swipes the obedience disk remote control from Valkyrie and removes his disk, but nothing is removed from the Hulk (or Banner when applicable).  Even if Hulk had a different obedience disk control, it was never used to try and force Thor to turn himself in or shock Hulk or anything like that.  If The Hulk is not wearing an obedience disk, then that means he is a STRAIGHT UP MURDERER!  NOT OKAY MOVIE!!

Without an obedience disk, Hulk is not being involuntarily made to fight.  He is instead the obstacle you must overcome if you want your freedom from being held against your will and being forced to fight for your life.  He is a WILLING PARTICIPANT in these battles!  Out of all the things to use or not use from the Planet Hulk comics, the one thing that is ESSENTIAL is that The Hulk is wearing an obedience disk!  The arguments you make against the Hulk not wearing a disk don’t hold up.  “It’s because of his child like intelligence, he didn’t know what he was doing.”  His intelligence in the movie is a whole other thing, but the bottom line there is that Hulk knows right from wrong and shouldn’t be killing people that are being forced to fight him.  Using that argument also made the scenes of him in his room with Thor and Valkyrie hard to watch, seeing this fun, sweet side of him all the while knowing that the people he fights during the contest are killed.

“He’s defending himself.”  Not if he’s CHOOSING to fight.  AT BEST, he’s Ivan Freaking Drago from Rocky IV. 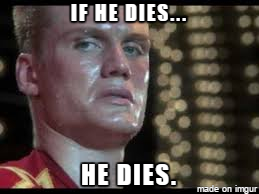 “The Hulk’s found a place where he’s accepted and revered.”  This is the only argument I’ll maybe consider and appears to be the movie’s choice, but no.  Hulk knows what it’s like to be ruthlessly hunted, I like to believe he wouldn’t want his glory to come at the expense of innocent people.  Call me crazy, but I like my super heroes to be, you know, SUPER HEROES, and this otherwise fine movie dropped the ball with The Hulk by not having an obedience disk on him.