Skip to content
You are here
Home > Comics > Godzilla: King of the Crossovers? 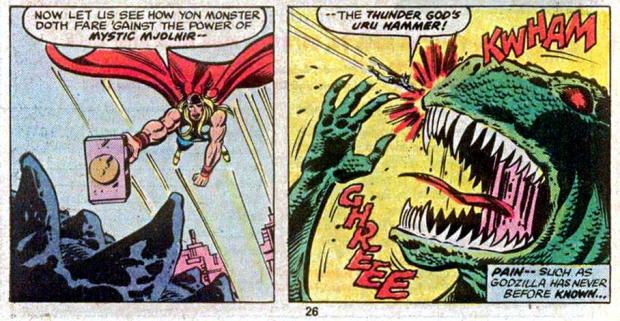 Sometime down the line I plan on doing a piece about which characters have crossed over the most with other characters in pop culture. Just going off the top of my head I feel like it’s probably Archie, but Archie doesn’t have a movie coming out this weekend, Godzilla does! So let’s take a look at a few of the times everyone’s favorite nuclear powered monster has crossed over with some pop culture icons.

Not the earliest film crossover in history but possibly the most “so obvious it has to be done” one of all time, King Kong vs. Godzilla was released in Japan in 1962. Universal Pictures released a heavily altered English version that included new scenes, sound, and dubbing in the summer of 1963. Godzilla vs. Kong is slated for release next year, which is to Legendary Entertainment’s MonsterVerse what Avengers was to the Marvel Cinematic Universe.

For the most part, I was aware of everything I was writing about for this article’s existence, but while doing some research I came across this incredible cartoon by Marv Newland that I had no idea existed. This came out back in 1969 and is so wonderful in it’s simplicity. I’m REALLY hoping this is Disney’s next live action remake!

If you’re of a certain age you’ll remember this very well. In 1992 Nike made a commercial where Godzilla and Charles Barkley went one-on-one (later on it was turned into a comic book). Despite the commercial opening with Godzilla attacking Tokyo, this actually shows Godzilla’s levelheaded temperament, as Barkley commits a very obvious offensive foul on the way to the hoop and Godzilla just shrugs it off.

Godzilla In The Marvel Universe

Back in the late 70’s, Godzilla starred in his own comic, Godzilla, King Of The Monsters, which lasted for 24 issues. This was the main Marvel Universe too, so Godzilla got to interact with several Marvel A-listers, including The Avengers and the Fantastic Four.

Unfortunately Godzilla never encountered The Hulk during his time in the Marvel Universe, which is a shame, but we did get a confrontation just as epic:

IDW Publishing had the rights to Godzilla as recently as 2016, but unfortunately Godzilla never crossed over with some of the other franchises they have the rights to, including Transformers, G.I. Joe, Teenage Mutant Ninja Turtles, Star Trek or Ghostbusters.

What NBA player should Godzilla play against in an updated commercial? What Godzilla crossover do you want to see? My vote is for Archie Meets Godzilla! Let me know in the comments and I’ll catch you next time!